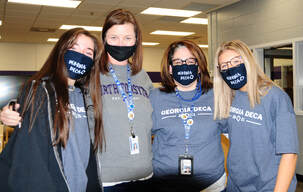 What is DECA? DECA is the national association for students and teachers of marketing, management, and entrepreneurship. It is a co-curricular student organization, as DECA activities are designed to reinforce the competencies taught in the Marketing Management and Sports and Entertainment Marketing Pathways. Through DECA, North Forsyth High School students learn what it takes to be successful in today's fast-paced world of marketing.

DECA Mission. The mission of DECA is to prepare emerging leaders and entrepreneurs for careers in marketing, finance, hospitality and management in high schools and colleges around the globe.

Scholarships.  DECA's scholarship program provides over $250,000 in scholarships at the International Career Development Conference each year. More than 50 corporations provide scholarships through the DECA Scholarship Program. DECA administers the program based on guidelines set by the donor and scholarships are strictly merit based.

Leadership Development.  Leadership development is one of the four basic principles that form the foundation upon which DECA was built. Approximately 50,000 DECA members participate in DECA's leadership development programs. DECA's leadership program focuses on the following six leadership skills: DECA Members Gain 21st Century Skills. Through participation in DECA activities, 92% DECA members say they learned how to communicate thoughts and ideas, how to organize a presentation and more about what businesses expect from employees, while gaining problem solving skills.